Netherlands – In 2013 Asia Pulp and Paper (APP) committed to use plantation fiber instead of clearing natural forests. However, in the same year APP announced the construction of a multi-billion dollar pulp mill in South Sumatra, Indonesia. A report launched today by twelve NGOs, including Wetlands International, shows that there is a high risk that the supply base of the plantation wood fiber for this mill is insecure. This is largely due to the degradation of peatlands which are drained for pulp-for-paper plantations. Drained peatlands cause increased fire risks, land subsidence, carbon emissions, and floods that cause the loss of land productivity. These peatland plantations constitute 77% of the supply base for the mill.

APP has also committed to contribute to Indonesia’s target to reduce GHG emissions. The degradation of peatlands in Indonesia presents a huge challenge for Indonesia’s commitment to the Paris Climate Agreement that will be signed on Friday. Indonesia is one of the world’s largest producers of greenhouse gas emissions, with 50 percent of its emissions from peatland deforestation and drainage.

Peatlands and the haze disaster

Peatland drainage makes the area highly prone to fires which, as last years’ haze disaster has shown, can grow to catastrophic proportions. It impacts on public health with millions of people inhaling toxic haze, causing respiratory diseases and several deaths. Between January 1 and October 11, 2015, 50% of all “high-confidence” fire hotspots on peatlands identified were in plantations affiliated with APP. Within APP’s concessions in South Sumatra, it is estimated that 293,000 ha burned in 2015, including 86,000 ha of planted Acacia trees (26% of planted area in the province). Fires thus directly impact on the active fiber supply base for the pulp mill, reducing its economic viability. 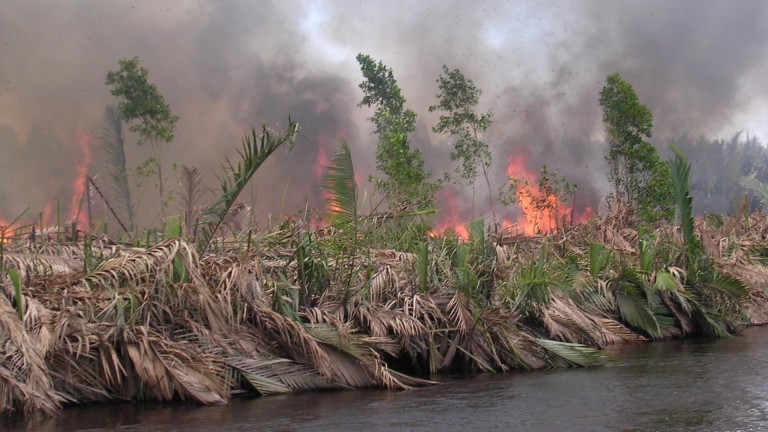 In 2015, Wetlands International called for a National Peatland Strategy to curb future haze disaster. The government has taken significant action including formation of a national Peatland Restoration Agency. So far the response from major peat-based companies to the issues related to peatland management has been insufficient, and some, such as APP  are still expanding and enhancing their dependency on unsustainable use of peatlands. The current report exposes the major risks this entails for APP, its investors, the local communities and Indonesia’s economy.

The threat from subsidence

Peatland subsidence in drained plantations is caused by compaction and oxidation. The oxidation turns the peat carbon store, developed over thousands of years,  into an active source of CO2. Subsidence resulting from the carbon emissions brings the peat soil down to levels at which drainage is no longer possible. This happens at a rate of  3- 5 cm per year after an initial rapid compaction of 75 cm in the first year. On the Kampar peninsula in Indonesia, where APP has many plantations, it has been shown that within the next 25 years almost 25% of the Acacia plantations will experience frequent and prolonged flooding and 67% will be have significant drainage problems – impacting on productivity.

In the shallow peatlands of South Sumatra, where APP has developed most of its plantations for the new mill, subsidence could lead to flooding within 16 years for 2 m deep peat and 36 years for 3 m deep peat. This will again reduce the viability of these plantations and reduce the economic viability of the planned pulp mill. Millions of hectares of peatlands in Indonesia are being drained for Acacia and palm oil, and will experience irreversible subsidence, related flooding and loss of production. The impacts of this will be disastrous for the viability of the plantations, for the local communities and the Indonesian economy as a whole.

Will APP default on its commitments?

The authors of the current report are highly concerned about the sustainability of APPs expanding operations, and expose the high risks for the required fiber supply of the new giant pulp-for-paper mill developed by APP. Fiber shortage as a result of dependency on peat-based operations could pressure APP to default on its non-deforestation commitment. The need for continued supply will impede the options to change from the current unsustainable business practices to alternative sustainable land-use options for Indonesia’s peatlands. In order to avoid the risk of deforestation and increased GHG emissions from drainage, Indonesia’s government and private sector will need to consider phasing out drainage-based peatland use, such as the Acacia pulp wood and palm oil concessions, and plan for peatland restoration, including phasing in alternative crops that are adapted to grow on wet peatlands (known as paludiculture).