On November 19th, Indonesia showed itself as a pioneer in embracing the Building with Nature approach to help protect their eroding coastline. In a virtual event the Indonesian ministries of Marine Affairs and Fisheries (MMAF) and Public Works and Housing (PU-PR), Wetlands International and EcoShape, presented results and success factors of 5 years of Building with Nature in Demak district, Central Java, and their ambitions for upscaling.

Hendra Yusran Siry, Secretary of Directorate General of Marine Spatial Management, said in his keynote speech on behalf of the Indonesian Minister of Marine Affairs and Fisheries, that he hopes that “Building with Nature” alongside other approaches, can make a real contribution to achieving Indonesia’s ambitions regarding climate change adaptation. And more importantly, increasing the resilience of communities in coastal areas.

He added: “Let me invite you, the global community who attended this meeting, especially regional and global investors and financial institutions, to provide green support in developing and implementing a more environmentally friendly and multi-use development approach, so as to accelerate adaptation globally. Hopefully this meeting can produce concrete steps forward to realize these hopes.” 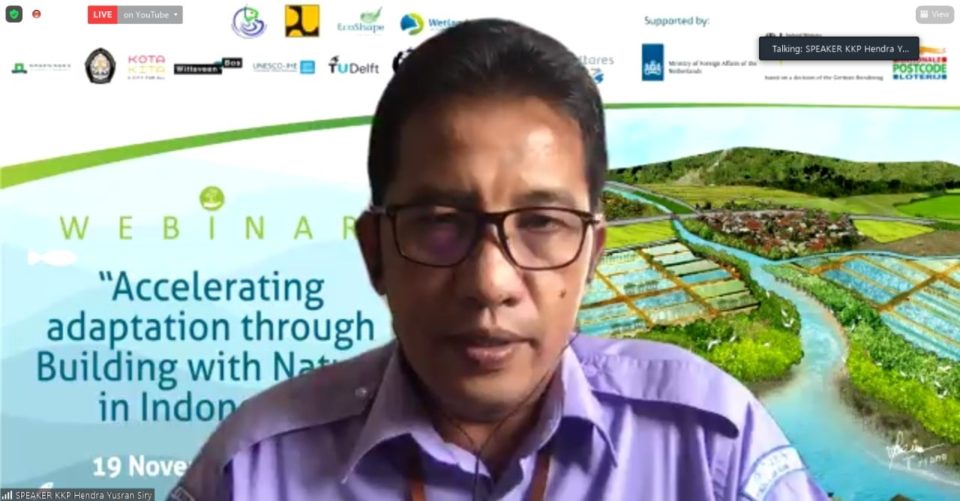 To reverse the erosion of the mangrove-mud coasts in Sayung district, Demak, a Building with Nature Consortium, funded by the Netherlands and Germany, built more than 9 kilometres of permeable structures to restore the sediment dynamics and enable mangrove recovery. Sustainable aquaculture practices were introduced through coastal field schools that tripled local incomes and can co-exist with a healthy mangrove forest. Since the 1990’s coastal communities  suffer from flooding, lost income and were even evacuated as their houses inundated.

During a talkshow at the webinar, project partners that ranged from experts in engineering, ecology, aquaculture, community development and governance expressed the importance of this multi-disciplinary collaboration in Building with Nature. They also all emphasised the importance of the involvement of local communities right from the start in the project design. Villagers constructed the permeable structures and converted degraded fish ponds into restored mangrove, in return for support in sustainable livelihood development. The responsibilities for the measures have now all been transferred to the communities and they have been empowered to join policy dialogues to express their needs, successfully securing additional government support for these measures.

Yus Rusila Noor, Project Manager Wetlands International Indonesia: “These socio-economic programmes worked as a catalyst for intra- and inter-community dialogues and collaboration. Villagers recognise the importance of mangrove conservation and have new forms of income. Now they are training the next generation. It’s a win-win situation with a strong business case.”

Spotlight on the challenge of land subsidence

While erosion was stopped in many places, young trees that emerged mostly died because of land subsidence, caused by unsustainable groundwater extraction by industry in Semarang and Demak. While the measures have softened and delayed the impact of hazards and helped communities to adapt, the hinterland behind the villages is progressively being lost. The project therefore initiated dialogues for the development of a roadmap on land subsidence at national and province level. Land subsidence is a key concern in cities, coastlines and delta’s in Indonesia and across Asia.

High replication potential and scaling up

There is high potential to replicate the approaches as applied in Demak and adapt them to site specific needs. A recent risk mapping showed that 20% of the population of North Java can potentially flood with average storm surges. Conservation and restoration of mangroves was flagged as top priority to maintain coastal integrity.

MMAF already replicated the permeable structures in 13 districts across Indonesia, while PU-PR secured funding for research to monitor impact and produced a national guideline on Hybrid Engineering. Both ministries are developing new government programs to scale up Building with Nature solutions to address their water infrastructure challenges.

The project also trained 8 universities and knowledge institutes in Indonesia, to build the capacity of a new generation of engineers and ecologists, governments, and investment institutions.

Indonesia is also committed to share its experiences with other Asian countries to scale up nature-based adaptation measures needed to protect the region from the growing host of hazards like flooding, storm damage and coastal erosion.

Ardi Stoios-Braken, the Minister Plenipotentiary of the Dutch Embassy in Indonesia said that the world needs inspiring examples like this innovative programme in Demak to demonstrate that better protection of communities against climate impacts can go hand in hand with benefits for nature and the local economy.

“The replication potential of the solutions applied in Demak is substantial. And the experience and knowledge gained supports the upscaling of Nature Based Solutions in other low-lying deltas and thereby helps accelerating climate adaptation actions. This can be the start of further upscaling of Building with Nature solutions in Indonesia and beyond, along muddy coasts, but also for river management, Resilient cities and for Lowland Development. 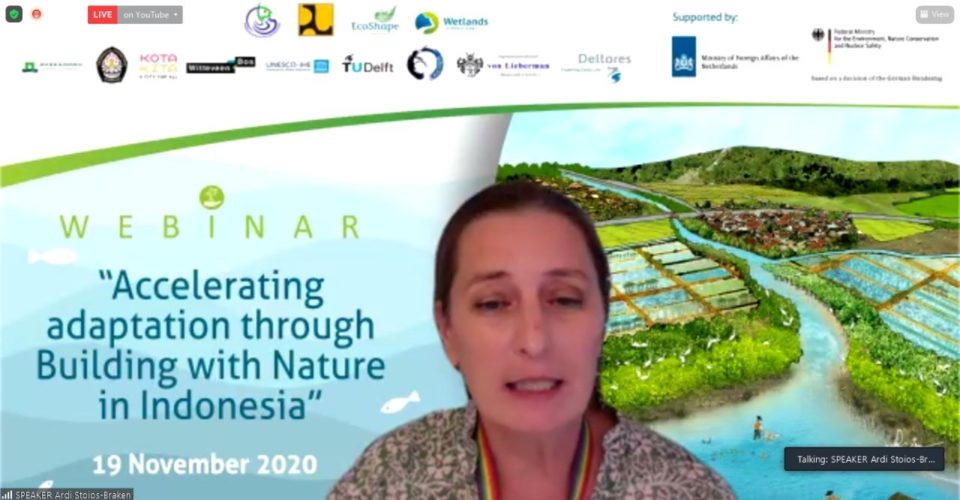 The Government of the Netherlands will continue to support the government of Indonesia in applying Nature Based Solutions through several programmes, and is looking forward to continuing joining forces to enable upscaling Building with Nature in the wider Asia region.

Warthane Puvanarajah from the German Embassy in Indonesia, said that the German Federal Ministry for the Environment, Nature Conservation and Nuclear Safety (BMU) that supported the project in Indonesia, is now shifting to scaling up pilots that implement ecosystem restoration, not only in Indonesia, but also in the region. BMU is therefore supporting the Building with Nature Asia initiative, which is being developed by Wetlands International in collaboration with MMAF, EcoShape, One Architecture and the Global Centre on Adaptation, partnering up with Indonesia, Philippines, India, Malaysia and China.

The solutions and lessons learnt by the EcoShape Consortium, built up over 12 years of Building with Nature pilot projects in different water infrastructure settings, have recently been summarised in a new book that can already be pre-ordered. “The programme in Indonesia was the largest and most far reaching pilot so far and has contributed most to our understanding of what it means to be Building with Nature”, said Henk Nieboer, Director of EcoShape. He also underlined the important role of NGO’s like Wetlands International in Building with Nature consortia.

Henk Ovink, Special Envoy for International Water Affairs of the Netherlands concluded by saying that: “Building with Nature is the way forward to accelerate adaptation for water infrastructure challenges. During the Climate Adaptation Summit on 25 January 2021 we aim collectively to pave the way to leverage investments to scale up these innovative approaches, in Indonesia, in and around Demak as well as Semarang, in Asia and beyond.”

Recordings of the webinar are available here.

Watch the video to find out more about the project:

The project was supported by the Dutch Sustainable Water Fund and the German Federal Ministry for the Environment, Nature Conservation and Nuclear Safety (BMU).